Do you ask yourself “how do resin printers work?” Where this type of printing has become the most popular nowadays, because it is easy to use, and it has high quality, in addition to that its price decreases, so we choose in this article to talk about it in some detail and explain what the types and how it works, follow us. 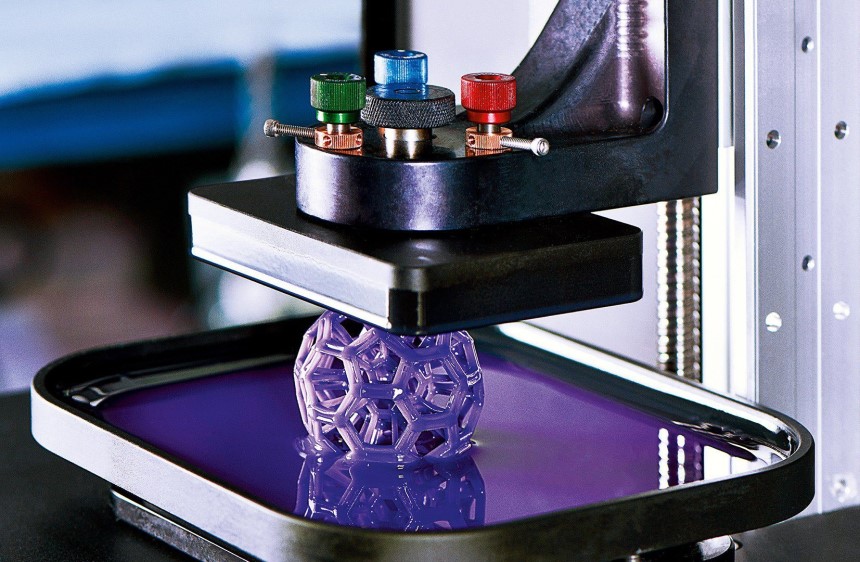 We will respond to the question “how do resin printers work?”, By explaining the concept of these printers.

The resin 3D printer simply is a machine which stores the liquid resin in a container instead of being injected into a nozzle as the following:

When you talk about 3D printers, you have two major options, the first option is the filament 3D printer or called FDM or FFF 3D printer.

While the second one is a resin 3D printer, it has three types: SLA or MSLA or PLD 3D printer.

But the question is “what is the thing that makes a resin 3D printer the best”?

What are the features of resins printing?

After you know what is, and how do resin printers work?, you may ask yourself what are the resins features?

Many professionals use it today, as when resins are exposed to a certain wavelength of light, the short molecular chains combine with each other.

Thus the monomers and oligos crystallize over and over into different geometries that may be rigid or flexible.

In addition, the number of moving components in a resin printer is fewer than a filament printer, so it doesn’t need much maintenance.

What are the components?

The resin 3D printer components are:

As we pointed out in previous, there are three types of resin 3D printing, now we will explain “how do resin printers work?”.

SLA is a machine with a vat of photosensitive liquid resin, where exposing it to UV LED light beams (leaser) constantly layer after layer.

And this process is repeated to even hardening the resin into a plastic 3D model fully.

The light is applied as a specific pattern so the desired shape can be formed.

SLA 3D printers contain several components as a light source, a building platform, a resin VAT, a pair of galvanometers, and an elevator.

The elevator is to increase or decrease the building platform height, so that layers may form through the printing process.

While the galvanometers are movable mirrors and used to align the beam of lesser.

Digital Light Processing technology is like the SLA tech but it uses a digital projection surface instead of lasers as light source.

With SLA resin technology you can print one point at a time, but DLP resin 3D printing technology prints a complete layer at a time.

In addition to that, it is much smoother, but the increase of the print area significantly decreases the quality.

This technology is very reliable because its system isn’t complex and it hasn’t any moving parts.

In resin 3D printers, the projection is controlled by DMD (Digital Micromirror Device).

Where DMD includes micromirrors, which range from hundreds to millions.

That allows it to project the light at different spots and print layered patterns in a better way while consolidating an entire layer at layer.

The layer image consists primarily of pixels, as a digital display is the initiation point of any layer that is formed using the DLP 3D printer.

In 3D printing, the points are in the form of prisms that you can see on all three angles.

Only one layer is printed completely, where the platform is lifted at a specific height so, the following layer from the model is printed.

As we talk, DLP printing needs a micromirror device to transmit the light from the projector.

But LCD 3D printers don’t need that, where the light comes from the LEDs that glow by the LCD screen, directly.

The cause of that is the LCD 3D printing individual or additional components are relatively inexpensive.

It is worth saying that the LCD 3D printer lifespan is a bit shorter than the DLP chipset, and needs more maintenance.

But LCD/MSLA 3D printing is quite popular, that comes from its advantages as smoother surfaces and prints relatively fast.

In addition to that, the emitted light from LCD screens is harmful on the organic compounds within.

So that you should change them according to how many hours you have used them and its performance.

Finally, you know “how do resin printers work?”, you can choose one of them as suitable for your needs.

How Does a 3D Pen Work

We use cookies on our website to give you the most relevant experience by remembering your preferences and repeat visits. By clicking “Accept & Close”, you consent to the use of ALL the cookies. However, you may visit "Cookie Settings" to provide a controlled consent.
Cookie SettingsAccept & Close
Manage consent